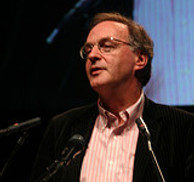 Dr. Alexander Rinnooy Kan has been crown member and chairman of the Dutch Social Economic Council (SER), since August 2006. He was put forward unanimously by employers and employee representatives in the SER. Next to that, Rinnooy Kan is chairman of the Board of Commissioners of the Concertgebouw N.V. (the highly regarded Dutch concert hall) and chairman of the Foundation Praemium Erasmianum. Since 2006, he is ambassador of the interests association for volunteers wherein he strives to enhance the attention to volunteer work. He is also a member of the Committee for Recommendation of Education Centre Foundation the White Tulip, which aims to promote beta education among students. Finally, he is a member of the Committee for Recommendation of Dutch Worldwide Students which aims to stimulate students to study abroad.

In the past, Rinnooy Kan has held a variety of important positions. In 1983 he was appointed as director of the Econometric Institute of the Erasmus University Rotterdam where he was appointed rector magnificus in 1986. In between he was guest professor at University of California, Berkeley and the Massachusetts Institute of Technology (MIT), among others.

From 1991 until 1996, Rinnooy Kan was a prominent spokesman for the Dutch trade of industry in his function of chairman of the Association of Dutch Entrepreneurs (VNO) and, after a merger between VNO and the Dutch Christian Employee Association (NCW), as chairman of VNO-NCW.

Starting in March of 2009, Rinnooy Kan will be chairman of the Prince Bernard Culture Foundation.